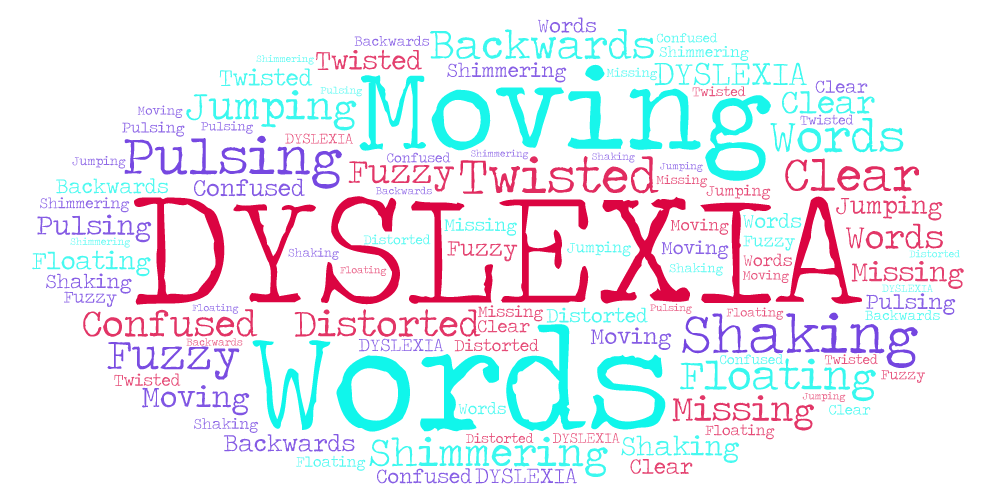 Dyslexia and vision: Seeing through the confusion

Over the years I’ve heard many different ways that children with dyslexia have described the way that text looks on a page when they read. Many people assume that dyslexia is a visual problem however there is a lot of confusion and misunderstanding about the issue so I think it’s important to clarify the link between dyslexia, the eyes and vision and what you can do to help you and your child.

At least one in ten people in the world have dyslexia or a closely related condition. Consequently, they have some very specific difficulties which can impede learning certain things. However, what they find difficult will be individual to them.

Dyslexia is a learning difficulty that primarily affects the skill involved in accurate and fluent word reading and spelling.Characteristic features of dyslexia are difficulties in phonological awareness, verbal memory and verbal processing speed.Dyslexia occurs across the range of intellectual abilities.It is best thought of a continuum, not a distinct category, and there are no clear cut-off points.Co-occurring difficulties may be seen in aspects of language, motor coordination, mental calculation, concentration and personal organisation, but these are not, by themselves, markers of dyslexia.A good indication of the severity and persistence of dyslexic difficulties can be gained by examining how the individual responds or has responded to well founded intervention'
Contents
What is Dyslexia?
Specific Learning Difficulties
What are visual tracking difficulties?
What are Binocular Vision Difficulties?
What are the difficulties with focusing?
What is visual stress?
How do I know if a child is struggling with their vision?
How do we diagnose these difficulties?
What can you do about these visual problems?

Dyslexia is a Specific Learning Difficulty (SpLD) that affects around 10% of the population. Dyslexia does not only affect reading and writing, but can also impact on spelling, maths, memory and organisational skills.

Dyslexia is one of a range of SpLDs. Also included in this broad term are:

The Rose Review (2009), entitled Identifying and Teaching Children and Young People with Dyslexia and Literacy Difficulties, was commissioned by the government in England and provided the following working definition of dyslexia and its characteristics:

In addition, there are visual processing difficulties that some individuals with dyslexia can experience. Furthermore, dyslexic learners can show a combination of abilities and difficulties that affect the learning process. Some may have strengths in areas such as design, problem solving, creative skills, interactive skills and oral skills.

The first important point to note is that dyslexia is NOT a visual condition; the underlying cause is a difficulty in converting written letters and words into language, specifically the sounds made by the letters. But what about all of the visual symptoms?

This is where the confusion arises. Dyslexics are more likely to have visual problems that happen at the same time as difficulties with decoding words. Visual difficulties often co-occur with dyslexia.

Dyslexics are more likely to have difficulties with visual tracking, binocular vision and focusing (accommodation). In the majority of these conditions a child may have good “sight” but struggles to use their eyes in the right way. A small percentage can also have a condition called visual stress (aka Meares Irlen syndrome, or mislabelled as “visual dyslexia”).

What are visual tracking difficulties?

Visual tracking refers to the ability to move the eyes accurately. This is extremely important when reading because we have to move our eyes from one word to the next while we take in the text. Inaccurate movements can cause children to miss words or line(s), lose their place or read lines again.which can significantly impair understanding of the text. For more information, click here>>

What are Binocular Vision Difficulties?

Binocular vision difficulties are a result of poor coordination between the eyes. It is a problem where the eyes don’t work or move together or there is a tendency for the eyes to drift further apart. The eyes don’t “converge” enough when reading. This difficulty causes words to run into each other, missing lines, re-reading the same lines or in extreme cases, double vision when reading. For more information, click here>>

What are the difficulties with focusing?

Focusing/accommodation relates to the ability of the lens inside the eye to maintain focus on the words and to keep them clear. Difficulty in focusing on text can cause blurry and unstable vision.

What is visual stress?

Visual stress, is a condition that can make words appear to move on the page. It can affect about 10 to 20% of dyslexics and is thought to be a neurological condition caused by interference to the visual signals to the brain These problems can give rise to visual symptoms that are often mistakenly labelled as dyslexia, especially the term “visual dyslexia” which is a misnomer because this is not dyslexia. Sometimes visual stress is present with the other difficulties above, which can compound the problem. Fortunately visual stress can be treated by using a special filter with a specific colour to neutralise the interference and the movement of the text.

How do I know if a child is struggling with their vision?

Ask them if they are having difficulties with their sight when reading, many kids don’t report these symptoms because they are either used to them or don’t realise that they aren’t normal. Ask if they ever see words moving, or if they miss words or lines when reading, or if they lose their place on the page. These are all signs of visual problems.

How do we diagnose these difficulties?

What can you do about these visual problems?

Fortunately, there are a few ways to correct visual skills. Some of the options are glasses with special lenses that will help to improve many of the difficulties. Some people benefit greatly by using specially tinted glasses. Vision therapy, which involves a range of tailored eye exercises and other therapy, is an effective way to make long lasting changes to visual skills.

Whilst it is not possible to treat or cure dyslexia, many of the co-occurring visual problems can be helped thus making it easier for a dyslexic to better comprehend the information they read.

Find Out More about our assessment for dyslexics